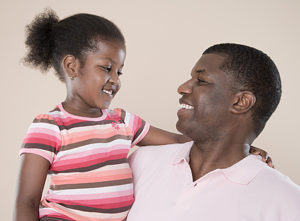 Because, after a mom gives birth, the child is immediately given to the mother for the initial bonding to take place. All the skin-to-skin contact, the placing of a daughter on the chest/heart of her mom, and the mutual cooing facilitate the bond. This bond becomes the basis for that baby daughter experiencing a giving kind of love. That bond also becomes the foundation for a daughter discovering who she is as a girl, young lady, and woman.

However, there is something different—yet equally as special and significant—that happens when a father gets to hold his baby girl.

When a father holds his baby girl, a blanket of doting commitment to love, provide, and protect—from all future suitors—floods a father’s heart for his little princess. There is something to be said for a little girl being seen through her daddy’s eyes.

When a father sees his daughter and their eyes lock, at a primal level she knows that she is safe. Safety is key to a little girl’s confidence.

When a father’s doting eyes embrace his daughter, a special bond is created.

My single mom birthed me after she fled her abusive husband…my biological progenitor.

The statistics continue to show the positive effects that fathers have on their daughters.

These statistics give credence to the protective role fathers provide for their daughter’s social and academic well-being. Fathers also provide psychological benefits.

Psychologically-speaking, the bond that a daughter has with her father is different and important. A father is the first “not-like-me” person that a young daughter encounters. This father-daughter relationship complements and balances out a girl’s progression towards her own identity.

While a daughter does bond with her mom, their “likeness” can make a daughter’s progression towards separateness and independence complicated.

This complication, in turn, often contributes to “issues” happening a mother-daughter relationship. Thus, a father’s presence is a needed safe place for a daughter to explore and discover who she is.

Though I didn’t grow up with my father, I encountered “dad saints” early in my life. The following are those three men:

Each of these men saw me and my uniqueness.

I can’t think of any of them without my eyes tearing up and my heart welling up with gratefulness. They each consistently went out of their way to encourage, affirm, challenge (a.k.a. “nudge”), and make time for me selflessly and without an ego.

As I think about it now, they’re actually a composite of the person I married.

I guess a young girl can end up marrying “someone like her (dad-saint)  father.”

Happy Father’s Day to all you dads and to the men who are being a “father to the fatherless.”

Know that you do make a difference.

Tell Me More About Your Father-Daughter Bond in this brief 4-question survey:

Create your own user feedback survey

Dr. Michelle Deering, Ed.D., is a Mother-Daughter Relationship Consultant, North Carolina-licensed clinical psychologist (LP, HSP-P), nationally board certified sport psychologist, best-selling author, and professional speaker. She is founder and CEO of Curative Connections LLC, a premier consulting firm in the Triangle Area of North Carolina that provides mother-daughter consultation and speaker services to moms, daughters (>18 years old), and organizations that service them. Her book, What Mothers Never Tell Their Daughters, will available in audio book format in the Spring 2019.